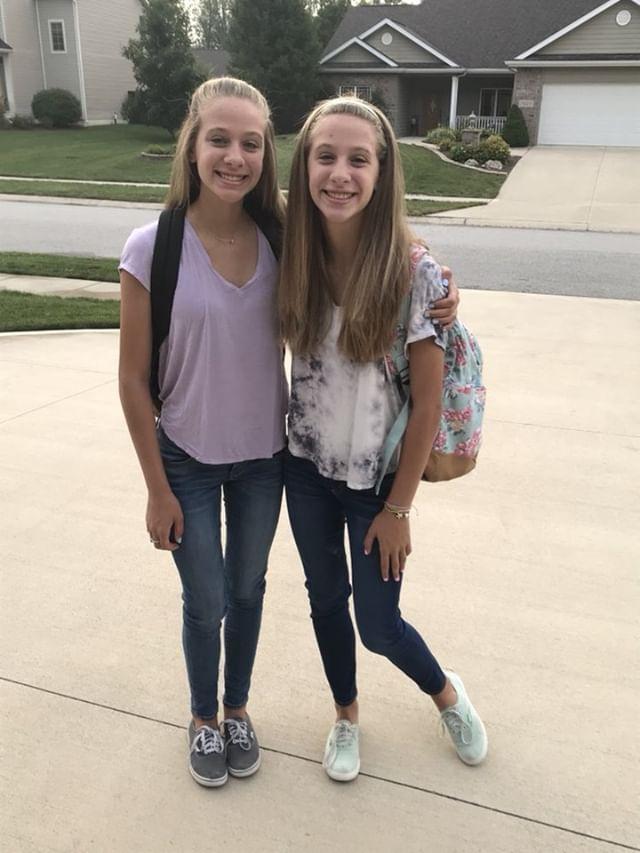 You’re walking in the hall and see that girl from your math class. You smile at her only to get a confused look back. It seems you got the wrong twin…

Twins. You either know one, are one, or want to be one.

With the rate of twin births rising 76 percent in the past 20 years, they are more common than one might initially expect. At Carroll alone there are over 20 sets of twins, meaning that whether you realize it or not, you likely pass one in the halls each day, have one in your class, or even sit with someone who has a twin at lunch.

Sophomores Emma and Weber Michell are just one set of fraternal boy-girl twins you might see in the halls of Carroll.

“Since Weber and I are fraternal twins no one ever realizes we are twins, so their reactions are usually really shocked,” said Emma Michell. “I knew this person for three years before she found out that Weber was my twin.”

Emma said that the best part of having a twin is “always having your best friend right beside you.” Whether it’s the first day of high school, the first time driving, or the first time taking the SAT, your twin is always there experiencing life’s milestones right next to you.

We all grew up watching Nickelodeon’s “Full House”. With both Mary-Kate and Ashley Olsen having played the one role of Michelle, the constant mystery of which twin was on your screen remained.

While it may be tricky telling one identical twin from the other, no twins are truly identical, despite the deceiving name. Due to genetic and environmental factors, identical twins are likely to have several physical variations, however small they might seem.

Even so, most identical twins are used to people confusing them and therefore are not too affected by the constant mix up.

“People do often confuse us and say we look identical, but I just don’t see it,” said sophomore Isabella Gandolfo, identical twins with Gianna Gandolfo. “I really don’t mind people getting the two of us mixed up because it is an innocent mistake.”

She explains that the only time it can get annoying is when people she has known for months do not make an effort to learn which twin she is.

“For instance I have been in classes all semester with people and some of them still call me Gianna or often times I will just be referred to by the color of my shirt,” said Isabella.

Although identical twins can cause some confusion at first, after getting to know each individual person it becomes easier and easier to identify who is who.

“I can easily tell the differences between the two of them because we grew up together, and they don’t look alike to me anymore,” said sophomore Evy Murphy, a close friend of the Gandolfo twins. “However, many people within our friend group and other people who know them constantly confuse who is who.”

Students aren’t the only people with twins at Carroll. Assistant Principal/Athletic Director Mr. Dan Ginder and math teacher Mr. Dave Ginder are another set of identical twins you might see within the school’s walls.

While they grew up close throughout their early years, even having gone to the same college, working together was never something on their radar.

“I don’t think the intentions were to ever work together and at the same place,” said Mr. Dan Ginder. “He got a job here first…and it wasn’t until an athletic director job opened up here that I came to Carroll. Life just happened.”

Because they are both in two completely different departments and because of the sheer size of Carroll, it is rare for them to even see one another from day-to-day without making a concerted effort to do so. Nonetheless, people still often confuse the two staff members.

“It’s the life I live. People get confused all the time, but people who know us well say they don’t have a problem at all,” said Mr. Dan Ginder. “When you grow up with it your whole life, if you let it bug you, it would drive you nuts. So no, it’s not a big deal.”

Across the board, it is common for twins to enjoy similar hobbies, share similar passions, and even hang out with similar friend groups. Mr. Dan and Dave Ginder are no exceptions.

And thus the age-old debate of nature vs. nurture resurfaces.

“When visiting the nature versus nurture debate, there is overwhelming evidence that both genetic and environmental factors can influence traits and diseases,” said Beben Benyamin, researcher of the Queensland Brain Institute at the University of Queensland. “What is comforting is that, on average, about 50 percent of individual differences are genetic and 50 percent are environmental.”

Therefore, while twins are genetically identical, their experiences, upbringing, and surroundings will ultimately cause them each to shape into their own person with their own personalities.

Evy Murphy, friend of the Gandolfo twins, attributes their similar personalities more to nurture than nature.

“I think the reason that they have such similar interests is mostly because they are siblings, not twins specifically,” she said. “You will often find that regular siblings have similar interests yet different personalities and opinions as well based on the way that their parents raised them.”

Nurture might be a prominent factor for identical twins, but nature plays a significant role in fraternal twins, specifically boy-girl twins.

“Weber and I are totally different, but I also think that being different genders affects that more than being twins,” said Emma Michell.

Nature versus nurture aside, twins are their own people and as a result have plenty of differences in their personalities.

“Gianna and I actually do have very similar personalities. We enjoy the same hobbies and love the same friends, but what is extremely different about the two of us is our taste in food!” said Isabella Gandolfo. “I enjoy much more sweet items while Gianna will put salt on everything.”

In March 2009, a set of identical twins from Houston, Texas, made the news when 15 year old Gemma Houghton was suddenly overcome with an intense feeling that her twin sister was in trouble. She went into the bathroom where she knew her sister Leanne was taking a bath to find her submerged, unconscious in the water. As an epileptic, Leanne had suffered a seizure. Gemma saved Leanne’s life, pulling her from the tub and administering CPR. If it weren’t for that inclination compelling Gemma to check on her sister, Leanne would have almost certainly drowned.

In stories like these, it’s easy to attribute the sudden inclination Gemma experienced to telepathy, or communication between two people simply through thoughts. But are twins truly telepathic like the world of Hollywood films always seem to portray?

A survey conducted by Dr. Lynne Cherkas, a genetic analyst at the department for twin research at King’s College London, showed that one in five identical twins said they had experienced some form of telepathy, and one in ten fraternal twins reported encountering the phenomenon.

Nevertheless, the twins of Carroll seem to think otherwise.

“I’m sad to say that twins don’t have a telepathic connection, but I can tell what Gianna is feeling just by looking at her,” said Isabella Gandolfo. “After many years it’s easy for me to realize when she is upset.”

While the bond might not be “telepathic”, there certainly is a strong bond between twins that allows for their own form of nonverbal communication and understanding.

“I think that when you have somebody you’re close to…you understand that person differently,” said Mr. Dan Ginder. “You understand that person to the point where there is just an easy bond, an easy conversation, understanding what they are seeing in certain situations. To say it’s telepathic, I don’t know if there is any truth to that ‘twinness’ but I also think I have a better understanding of who he [Dave] is and what he is thinking at different times.”

Telepathy aside, it is clear that twins share a unique bond that’s different from the bond between siblings.

Emma Michell said that because her and her twin brother are the same age and experiencing the same series of events at the same time, it creates a rare bond, unique to that of the bond between her and her two younger sisters.

Mr. Dan Ginder agrees, having not only a twin, but also an older brother and two older sisters. “We were close as brothers and sisters growing up, but I would say that because of [being] the same age and sharing a room–doing everything together–there is a different bond,” he said.

From having a forever friend to having someone who is there for you through all life’s up and downs, the twins of Carroll seem to agree that having a twin is something special.

“Having a twin is like having your best friend and worst enemy be the same person. Probably one of the best parts about being a twin is having someone who understands everything about you,” said Isabella Gandolfo. “With Gianna, I don’t have to explain hours of background knowledge while telling stories from my day.”

Both Emma and Isabella seem to agree that regardless of where life leads them, they know they will always be close with their twin.

“We both have very different plans for the future, but I know that we will definitely still be as close as always,” said Emma Michell.

“I can confidently say that Gianna and I will definitely stay close throughout the rest of our lives,” said Isabella. “I don’t know if we will go to the same college, but even if we go our separate ways I know we will always stay close.”