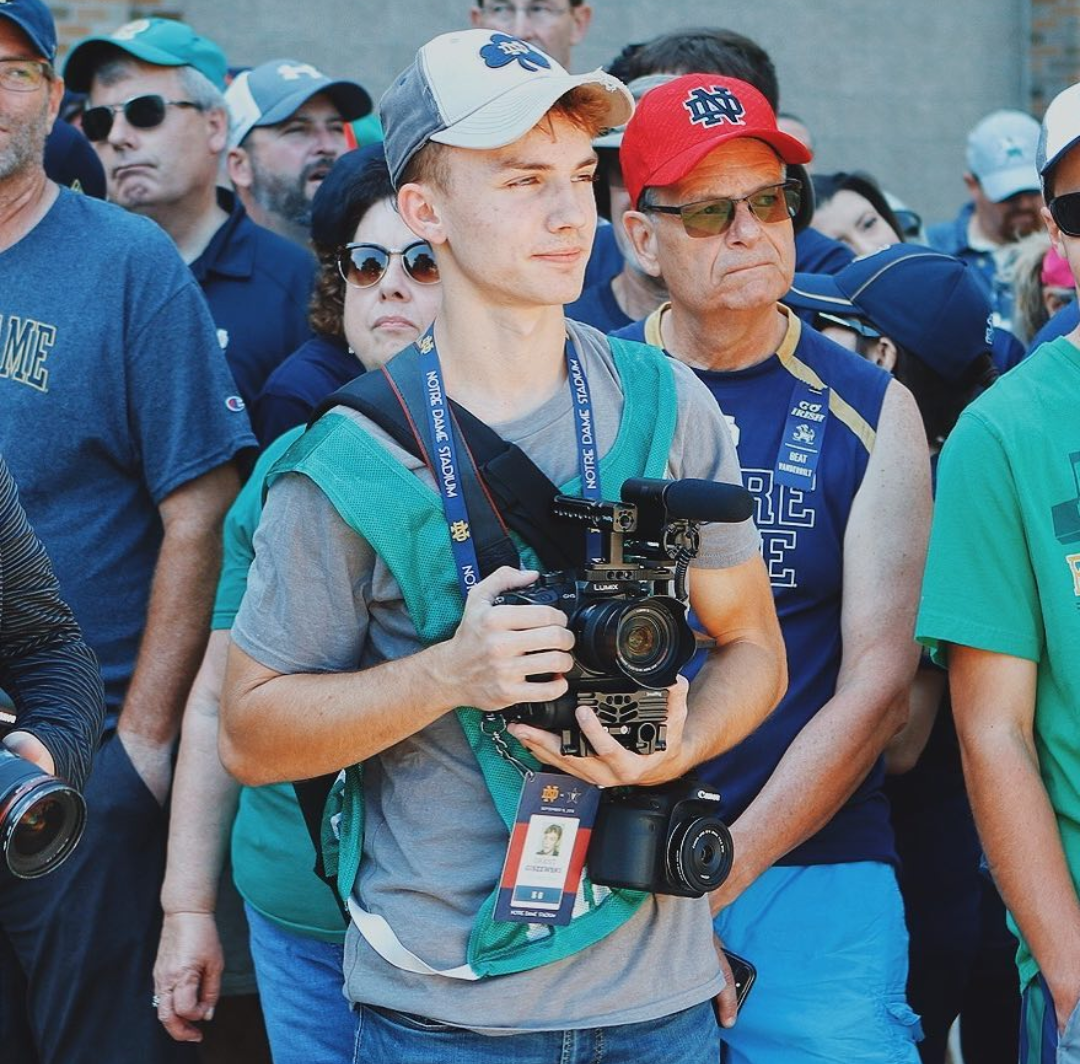 Giszewski looks on during a recent Notre Dame football game

Giszewski looks on during a recent Notre Dame football game

Creating Videos More Than a Hobby for Giszewski

Senior Grant Giszewski never planned on getting into creating videos on any serious level. But as life would have it, that’s the direction his life is heading.

While just sitting around one day over Thanksgiving Break in 2015, a Freshman Giszewski decided he was ready to start spending his time more efficiently which led him to creating a new email, creating a new Instagram account under the name @cleatsetc, and as he says “the rest is history.”

Once he created the page Giszewski committed himself to growing in to as many followers as he could, and as fast as he could.

With the number of accounts on Instagram these days trying to do the same thing as him, make it big, and just in general, it is no simple task achieving a super high follower account but Giszewski found a way.

“I posted multiple times a day and made sure the pictures were quality,” Giszewski said.

But eventually the passion died down for Giszewski and later in his sophomore year he decided to sell the page to one of his friends in the soccer community after the page had accumulated upwards of 250,000 followers.

The new owner of the account paid Giszewski $5,000 for it, which Giszewski went on to put towards a new camera along with a nicer, newer car.

But it was also during his sophomore year at Carroll that he really started to find a passion in content creating via mostly videos but also adding in some pictures along the way.

While he already knew how to edit photos with Photoshop, Giszewski enrolled in Carroll’s Radio and TV One class, taught by Bob Johnston, which was where he started learning how to shoot and edit videos.

Not long after, Giszewski created yet another Instagram page. However things were different this time around.

Now instead of focusing his page on just taking and reposting pictures of soccer cleats, he wanted to use this new account to do more of the actual creation of content.

So Giszewski again went through and made a new Instagram account and now he called made it under the name @laxetc, paying some homage to the page that gave him his start.

Giszewski was now putting most of his focus on creating his videos, which he says were pretty bad early on when he first started out, he also continued to post pictures on the account which reached a hair over 8,000 followers before Giszewski stopped posting on it in September of this year.

Originally the videos he was making started out as videos reviewing lacrosse equipment as well as posting both edited and non-edited lacrosse highlights from the college lacrosse scene.

While he was a Sophomore, Giszewski also started playing lacrosse, joining the Carroll Lacrosse team that was formed as a club sport, similar to sports like hockey and bowling.

Once Giszewski’s content creating started to take off, a popular website known as SidelineSwap, a site where athletes from sports like baseball and softball to biking and skiing can buy and sell their gear, reached out to him with a job opportunity.

“I got my job at SidelineSwap while I was (running the page) laxetc. They (direct messaged) me and like my work and wanted me to do the same for them,” said Giszewski.

While he wouldn’t disclose how much he is paid by the company, headquartered in Boston, he added “they pay me well” with a laugh.

Giszewski’s responsibilities for the website vary on a fairly week to week basis as he does a lot of small Instagram advertisements to go alongside lacrosse hype up videos as the ‘lax’ season nears. However every week he edits a video for the sites YouTube channel. The video goes to SidelineSwaps hockey centered YouTube channel and is a part of their weekly series ‘What do the Pros wear’.

As of this writing, Gisezewski has edited videos showcasing the gear used by young stars like Rasmus Dahlin, a leader on the Gold Medal Winning US Women’s Olympic team in Hillary Knight, as well as established veterans and Stanley Cup winners like Sidney Crosby.

While at first this was more of just a hobby, as time went on the possibility of a full time job with the company started to become a reality, and this summer, Giszewski made a trip out to the company’s headquarters in Boston for a week to see how things run, meet all the people there, and of course, fulfill his newfound passion of making videos.

It was a great experience for Giszewski, not only for the reasons mentioned above but also in that he got to see all kinds of different gear they had there and also had the life experience of flying on his own for the first time.

But with the way things are going for him that likely won’t be his last time doing so.

Giszewski recently decided that he wouldn’t be attending any sort of college in the fall after graduation but will instead spend his days perfecting his craft and gearing up for what he hopes will be his future in creating videos.

“I firmly believe that college is not for everyone and I don’t think it’s the right choice for me,” Giszewski stated in an Instagram post on his personal account.

Where that future is exactly is anyone’s guess at this point but there’s a chance that future has already started with his job at SidelineSwap.

“If they offer me a full time job, the plan would be to move to Boston and work with them full time and be their videographer and marketing guy,” said Giszewski.

However SidelineSwap isn’t the only website for which Giszewski makes content for. Starting this football season Giszewski picked up a gig working the sidelines at Notre Dame home football games shooting videos for the website IrishSportsDaily.com.

A longtime Notre Dame fan, Giszewski came across the page when he saw their ‘sick’ pictures on Instagram so he decided to email, text, and direct message them until they responded to him about getting a job producing some of their content.

Giszewski’s first game came on September 1, 2018 when the then-12th ranked Irish took on Michigan in a top 15 matchup that caught national attention in week one and was the site of ESPN’s famed ‘College Gameday’ show that morning.

Giszewski continued making videos for the rest of the regular season for the Irish but as the now 3rd ranked Irish begin their playoff run Giszewski’s season has come to an end, with no plans currently in place to make the trip out to California for the College Football Playoff National Championship should the Irish advance past the #2 Clemson Tigers in their semifinal matchup on Decmeber 29th in Dallas, Texas.

Over the course of the team’s unbeaten season of 11-0, which Giszewski hopes will finish at 13-0 after a national title win, he made recap videos from home games, hype up videos, and a few videos zeroing in on a certain player that played a key role in the game.

However, the most viewed Notre Dame video on his personal Instagram is a video featuring Carroll grad and Notre Dame captain Drue Tranquill.

The video which has over 3,000 views on his personal Instagram account, combined with over 19,000 on IrishSportsDaily, and another 31,000 on the page of Tranquill himself, documents the 5th year Seniors journey from Carroll to this season at Notre Dame with footage from a WANE-15 segment where Tranquill discussed his commitment to the Irish, to videos of the star linebacker’s injuries that slowed his first seasons at the school.

“It’s amazing, (Tranquills) supported me so much and it inspires me that someone who’s already made it big from Carroll is helping me out and giving me advice,” he said.

While Giszewski likely won’t be back with the website next year if he makes the move to Boston to work full time with Sideline Swap, it was more the experience that Giszewski had being down on the sideline that means the most to him given his Irish fandom.

“It’s electric, it’s insanely loud, and there are also so many people. You are standing next to the players and they are so big,” said Giszewski.

The videos he created for Notre Dame helped grow his personal Instagram and increased his reputation around the school. However the videos he made for Carroll’s athletic teams have also grown his profile.

Beginning last season Giszewski has spent the majority of Carroll football games on the sideline shooting videos for the school.

The first video he made was a video from the 2017 Homecoming game. While he also made a video for this season’s homecoming game against South Side, his ‘hoco’ responsibilities grew this year when he was tapped to create the Homecoming Court video, which endured a year long hiatus after being previously produced by Carroll’s Radio and TV program.

Throughout this season Giszewski has made videos for most of the home football games but he has also shot a video for Carroll’s volleyball and girls soccer team so far this year with basketball footage likely on the way once the team begins playing conference games at home in the Spring semester.

While his short term plans are still largely in flux, Giszewski has a plan on where he wants his career to go, and it might just lead back to Notre Dame.

“My dream job would be working as an in-house editor or creative that makes content for social media and YouTube. Maybe at Notre Dame, or at New Balance, sports related would be awesome”

But nonetheless Giszewski’s foundation is built and he knows what he wants to do for the rest of his life.

And for a high school kid who just turned 18?

Well I guess you could say he’s way ahead of the game.