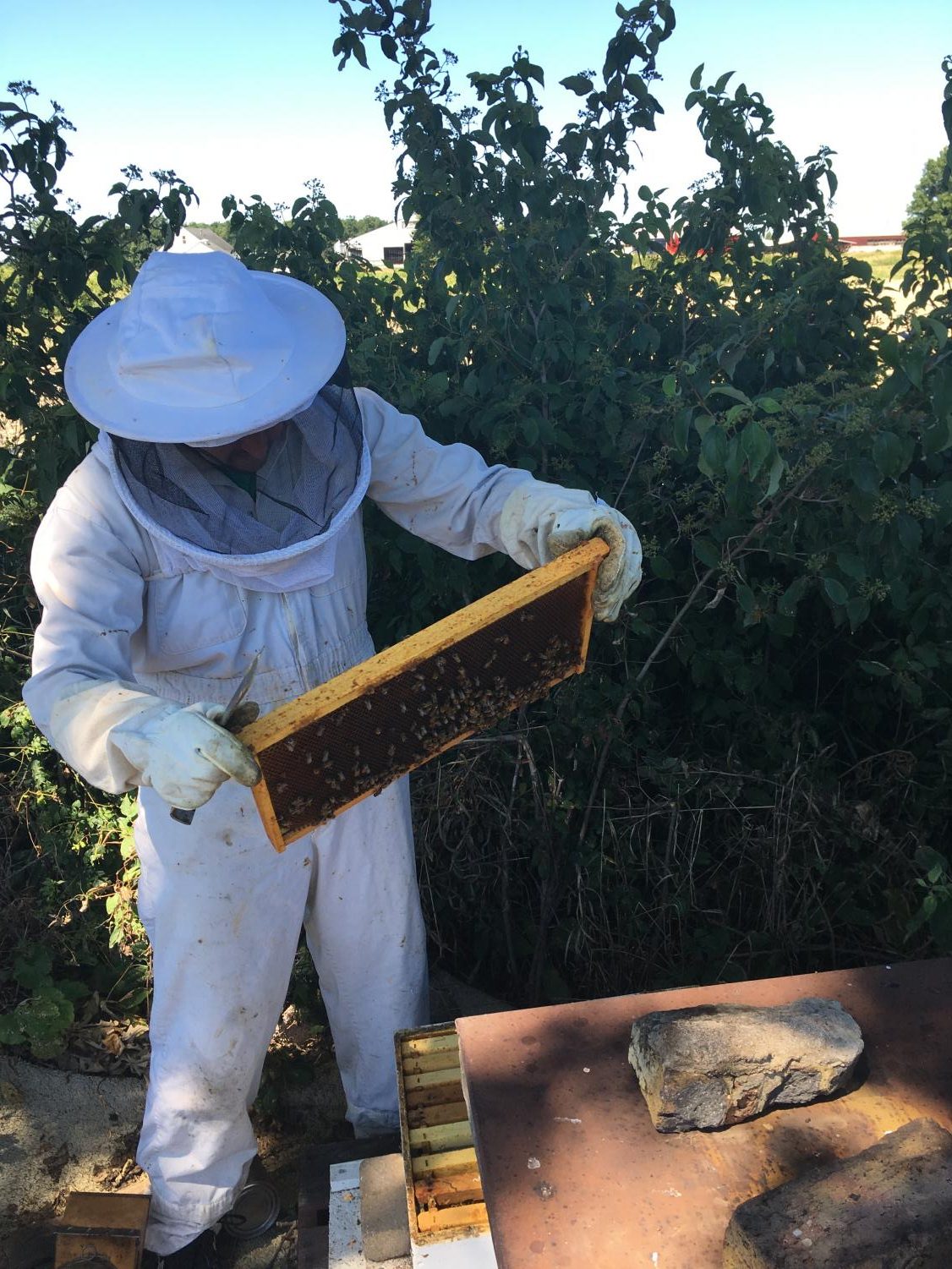 With a handful of bees, English teacher Jon Degitz keeps an apiary on his rural home. Photo courtesy of Mr. Degitz

With a handful of bees, English teacher Jon Degitz keeps an apiary on his rural home. Photo courtesy of Mr. Degitz

When the word “beekeeper” is heard, a vision of a person in a white hazmat-like suit pops into the minds of many. Most people might not automatically envision their high school English teacher as a beekeeper outside of grading papers and corralling students. But for students at Carroll, there is one person who has a different kind of hobby outside of the school day.

“When I taught at Huntington North one of my coworkers was a beekeeper,” said Jon Degitz, speech and English teacher at Carroll. “He would talk to me about bees. For a long time I would just take it and I thought, ‘That’s interesting’ but I never considered it as a thing I would want to pursue or even get a fire for, but there was just a spark that was lit, and it’s something that you just can’t explain.”

Once that spark was lit, Degitz read up all about bees and the beekeeping world. He knew it was really meant for him when one day, he got a call from his brother-in-law, telling him that his dad was about to toss out his old beekeeping equipment, and offered to give it all to him instead.

“Beekeeping equipment can be expensive,” said Degitz. “So I happily took it and really got into it.”

When talking about beekeeping, Degitz can talk for hours. Whether it’s about the importance of the queen bee, the possibility for a whole swarm leaving the hive, or talking about the collection of honey, it is easy to see that beekeeping plays an important role in his life.

Growing up in Fort Wayne, Degitz attended Northrop High School and went on to play baseball at St. Francis while obtaining his teaching degree. Right after college, he moved to Indianapolis for a year, then taught at Huntington North for six years, before ending up right back in the Fort.

Through all of this, his wife, Amber, stayed by his side.

Most middle school relationships end before they really become anything. But for Degitz and his wife, the story had a different ending.

“We’ve been ‘together’ since eighth grade,” said Degitz, tentatively saying “together”. “We went on our first real date when she was sixteen.”

The couple got married in 2006, and have since had three children; Aaron, who is six, Josey who is 8, and Audrey, the oldest, is 10. Along with their three children, the couple is now on the route to adoption.

Since the initial decision, the Degitz’s have had to fill out large amounts of paperwork, as well has traveling to Indianapolis to get background checks, and making sure that everything is able to go smoothly.

The adoption process is lengthy and sometimes difficult, but Degitz says he feels like it’s more than worth it.

It may be another year, it may be a few years into the future, but Degitz says he is excited about the future of his family expansion, and being able to spend time with the child and make them feel happy about the adoption.

“We will go and have a fifteen day ‘bonding trip’, which is what they call it. We just spend some time with the child. Then we go to pick up the child once everything is finalized and done.”

Degitz is a man filled with love for his family, love for his career, and love of bees. Life hasn’t always gone as expected, but he says that it’s so exciting so see how things change throughout life.

“I like to tell my students, you will be vastly different in ten, fifteen, twenty years from now,” he said. “I never thought I would be a beekeeper. If you wanna be a beekeeper, be a beekeeper. Nothing’s stopping you. You’re the only one holding yourself back.”