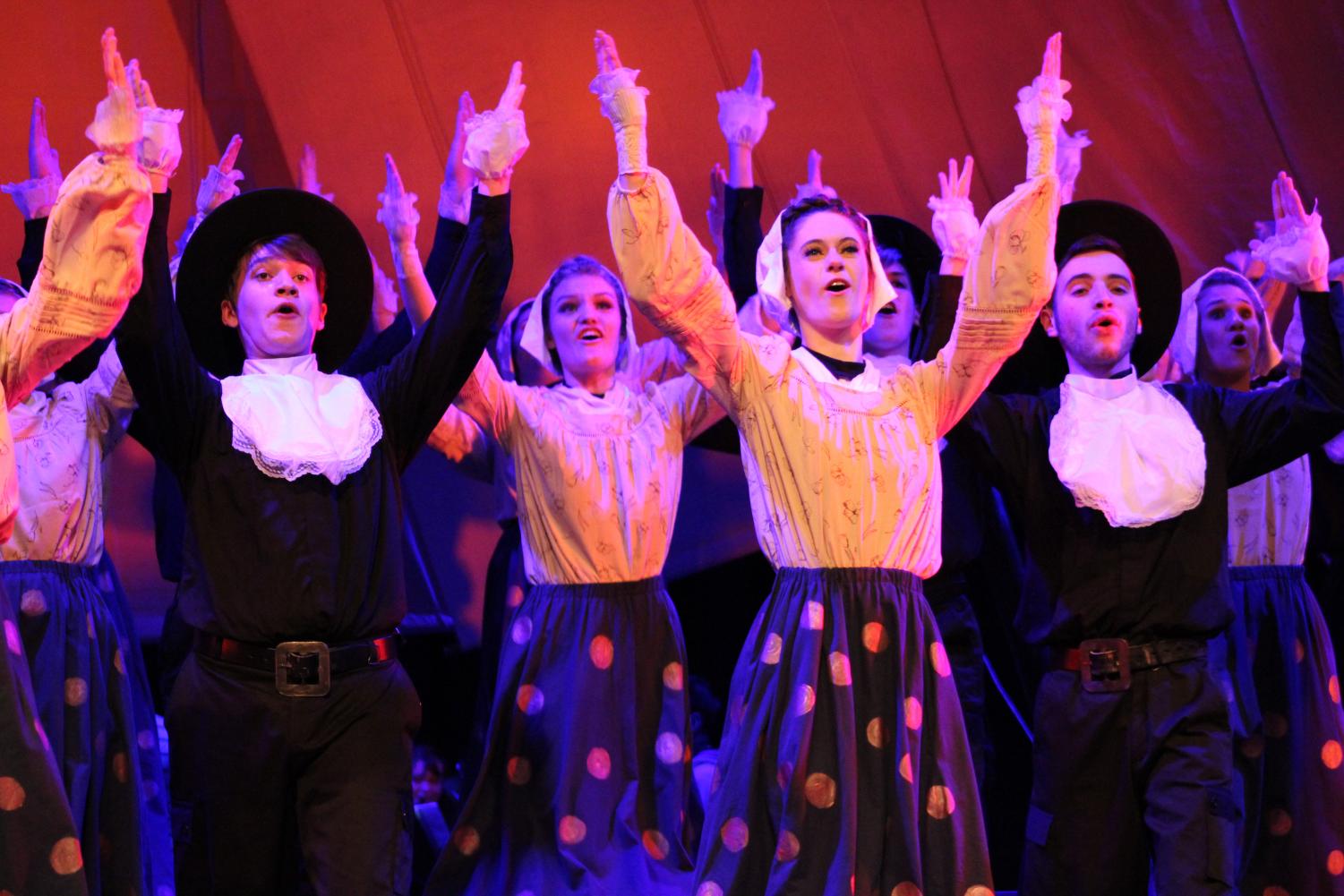 Minstrel Magic and Select Sound have punched their collective ticket to New York City arriving Thursday morning in the Bronx with a chance to qualify for national competition.

Pilgrims, fairies, and New York city are three words to describe the Carroll Show Choirs this year. Both groups contain around 50 members each from grades 9 – 12 and are directed by Jill Jeran and co-directed by Eric Smead.

The year itself has turned into a story of its own. The show choirs are a little over half way through their season with Select Sound having one grand championship and a few runners up under their belt. Minstrel Magic having now three grand champs this year is looking like the choirs of CHS are becoming a force to be reckoned with.

With the season still underway, the choirs plan stays on their hot streak as they head into Fame New York competition in the Hostes Center for the Arts and Culture involving choirs from the northeast half of the country. If the choirs place highly in the competition, they will have gotten their ticket to Nationals in Chicago.

“Every year we face new challenges, with new members coming in and disagreements always seem to happen but this year we have really focused and worked together and feel like a group,” said Junior Hallie Passino.

“My goal this year as assistant director was to bring the groups to a whole new level of competition. Which I do believe we have achieved.  It was a lot of years work both for students and us, it was my job to make sure that we were being consistent this year and really sticking to our goals. In the end I think it has really worked out for us,” said Smead.

But what are the two choirs all about?

Select Sound’s 2019 show is titled Thumbelina and tells the story of the well known character. The story of a fairy and her friends is told as Thumbelina is taken by different creatures until she is eventually found by her fairy prince. The story is told within the roughly 20-minute-long show consisting of about 5 songs.

The soloist of this year’s show playing Thumbelina is Senior Kaylee Haney. Kaylee is a three-year member, and she is in both Minstrel Magic and Select Sound.

“At the start we came off a poor season last year, but once it hit me that this was going to be my last year with my second family, things started looking up. The atmosphere this year is peaceful and I have had a joy performing both our shows. I can’t put into words what this group has meant to me and I am so excited to see how we can still grow,” said Haney

Minstrel Magic the mixed group of both boys and girls is performing a show titled A New World. It is the story of the 50 puritan separatists known as pilgrims, and their journey from persecution in their home in England, to their journey on the Mayflower and eventually to what is now America. The show lasts about the same time as Select Sound and contains 6 songs.

In this show there is no main characters, as it is really a story of all 50 of the pilgrims who managed to survive the journey and shows the struggles that they faced to eventually help build America. the soloists in the show include, (in order of appearance) Senior Maddie Carr, Juniors Harrison Hopkins and Asher Wigge, Senior Kaylee Haney and Freshmen Cameron Gregory.

“In past years we’ve struggled to compete with the top tier groups. Our vocals and dancing have always been just under the bar. But this year is a different story, almost every performance we have knocked out of the park and I think our group this year is one of the best ever had,” said Junior Asher Wigge.

If you can’t make it to one of Minstrel Magic and select sounds remaining competitions, don’t worry. The choirs perform the Thursday before each of their competitions almost every week inside the Large Auditorium for free. Select Sound takes the stage at 7 and Minstrel Magic follows right after them.