Meghan Holt a junior at Carroll High school has so many musical talents she would put the Pied Piper to shame. Her musical journey began when she was just starting elementary school. 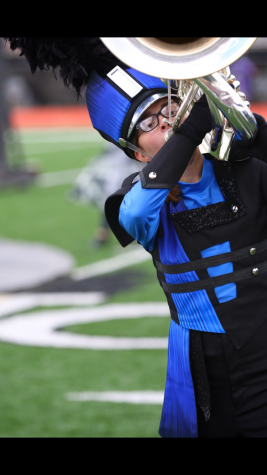 It started with the piano, which led to her discovering music to help her deal with overpowering emotions. She especially likes Claire de Lune and Mozart’s Fur Elise.

“It is total bliss to be able to just surround yourself in the music and emotions of where you are at that point in your life and just slip away for a moment,” she said.

Meghan has taken her deep love for music and has applied it to many things. Whether is be helping younger students with lessons or being involved in both the Carroll Marching Band and the Show Choir band.

Both bands not only served as an outlet for her music but a way to find her “closest friends.” one of those friends is senior Amelia Cisna who has been with Meghan in both marching band and show choir band.

“I find she has a deeper understanding on music than most people. She’s also able to clearly teach other people how to love music. She’s on the same level as her piano teacher but you’d never know that. All you know for a fact is how much she loves playing.” says Amelia

“Had it not been for marching band I wouldn’t have learned trumpet or tuba or wanted to be a drum major (fingers crossed for that last one),” Meghan said.

Already having a good number of instruments under her belt Meghan is always eager to expand her horizon of musical abilities. She has her favorites and ones that she looks forward to learning one day.

Meghan’s parents have been supporting her music career since the beginning. her mother loves to watch her play.

“She has become a very self confident person and this has helped her to challenge herself in ways she may not have been able to do before.” Says Meghan mother

Along with her piano and tuba skills, Meghan has learned to play guitar and bass.

“I play a ton of instruments but only a hand full of them really well,” she said.

She says she cannot play the trumpet and drums well and would like to play cello.

“I also own a violin, but I haven’t had proper lessons,” she added.

Music can speak just like words can and Meghan Holt has been able to learn many ways to speak through it. As her last year at Carroll is around the corner Meghan plans on continuing to share and expand her talents for years to come.

“I keep coming back for the way music had surrounded my life and helped me form connections.”