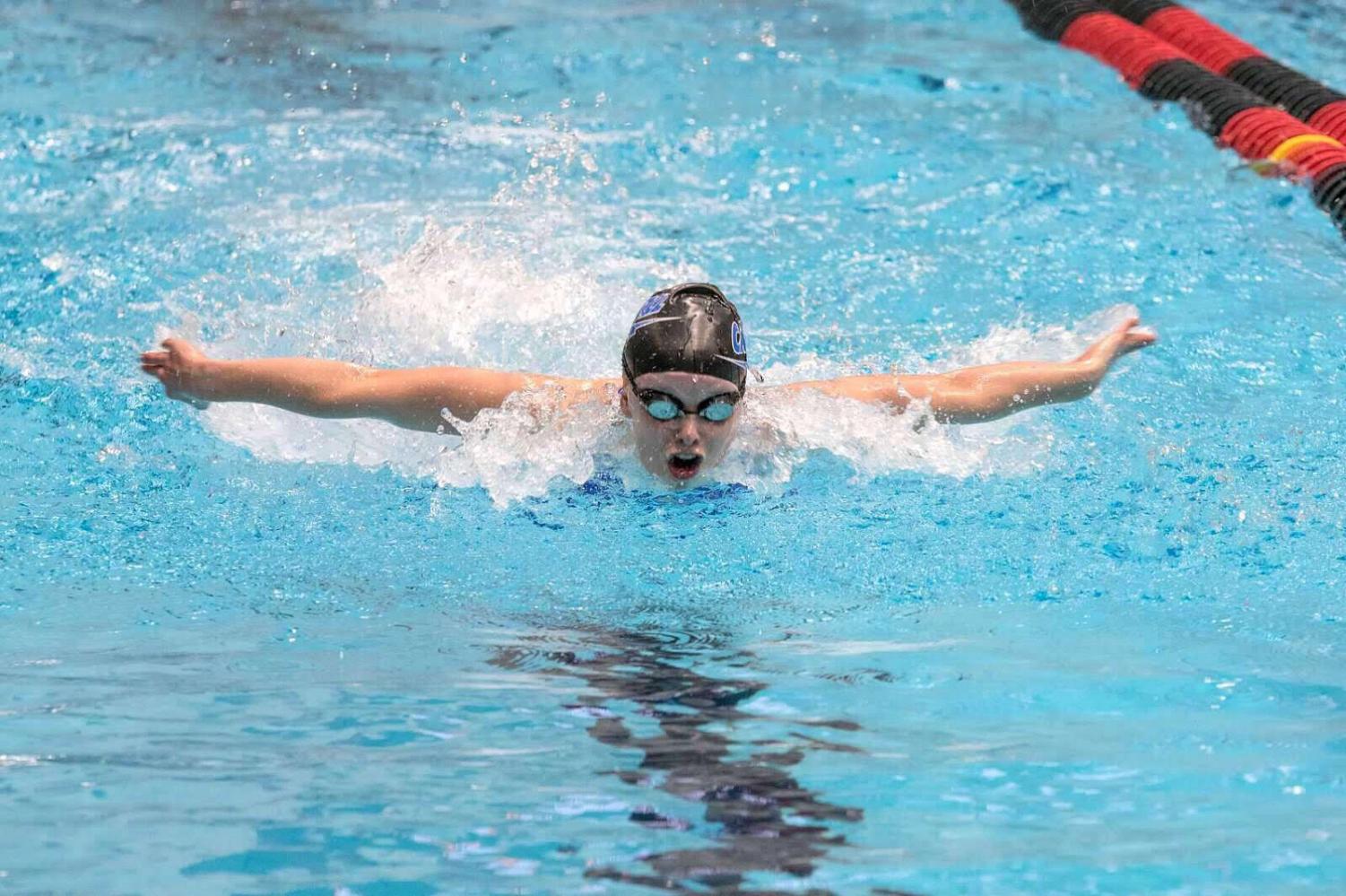 Veronica Lantz, junior, tore the labra in both shoulders. She had surgery to repair the damage. Photo courtesy of Veronica Lantz.

Veronica Lantz, junior, tore the labra in both shoulders. She had surgery to repair the damage. Photo courtesy of Veronica Lantz.

Coming out of high school as a 6 foot 2, 200-pound prospect, Drue Tranquill instantly began making a name for himself, ultimately landing him in South Bend at the University of Notre Dame.

The two-time captain and two-time academic All-American at Notre Dame initiated himself as a high-end individual throughout his high school and college careers.

Head coach of the Carroll High School football team, Doug Dinan, believes Drue is one of a kind.

“Drue is held at such a high regard and put up on that such high pedestal because of the way that he works, and behaves, and acts, and believes and everything that he does is such at a high level,” Dinan said.

It’s Mid-September and the sun is blazing down on the green turf layered throughout Notre Dame Stadium.

The play begins, TO THE BACK OF THE ENDZONE and the pass is deflected by Drue Tranquill! Joe Schmidt wants a celebratory chest bump, and up they go, but wait…

Coming back after his first torn ACL was hard, but now two?

Confidence in not only himself, but the medical professionals surrounding him was needed.

Drue was able to put his confidence into his lord and savior Jesus Christ. Ultimately highlighting this Bible verse on his Instagram account reflecting his faith:

“Now to him who is able to do immeasurably more than all we ask or imagine, according to his power that is at work within us.”

Drue’s spirituality kept him accountable to himself and his team. His virtue revealed his ability to guide.

“His leadership really blossomed during his senior year of high school, we knew he was a special guy. His contribution was large, not only as a player, but the spiritual side that he brought to the team as well” Dinan said.

A little over two weeks after the incident, he posted on social media a picture of him in the hospital bed wearing a Notre Dame visor.

Both arms flexed to the side of his head, from one to the other his biceps read:

Tattooed on his forearm “Psalm 23” is “The Lord is my Shepherd.” Continuing to dominate in his faith on all platforms above everything else.

He leaned on the Lord

He willed himself through one of the toughest journeys any athlete will ever face.

He put on muscle and worked his way to 6 foot 2, 235 pounds, dominating at all three positions he played in college: safety, rover, and linebacker.

Somebody once said that “hard work beats talents, when talents forgets to work hard.”

Through the long process of rehab and training, Tranquill made strides to becoming one of the best players to walk the field of Notre Dame Stadium.

He always believed that the timing of the Lord is perfect and he will never fail him. Drue’s consistency in Bible verses among his social media posts release a platform of his faith.

While remaining resilient, dedicating time to rehab, and focusing on time to his faith, it gave him a light at the end of the tunnel that he needed to see.

“Leadership is not always being that guy that is in the front, it’s doing the things that you need to do on a daily basis to make your team better, and I promise you, I feel that his interest in terms of recovering from injury was: one so that he could play again, but also doing what’s best for the team,” Dinan said.  “At any time if he felt it wasn’t best for the team, then he would put the team first.”

Collegiate athletics offers injuries that require determination for a comeback, but so do high school athletics.

Among many students-athletes at Carroll High School, they have had to overcome injuries that require a strong determination for a second chance.

Sprained ankles, torn labra, broken bones, and it all could lead to a long time of rehab and confidence.

Being apart and knowing a good amount of people who have suffered major injuries in high school, it is not an easy thing to come back from, but the major thing to have for yourself is confidence.

At the beginning of the school year, over six people had to have labrum surgery in their shoulders.

Having confidence in yourself, doctors, and coaches are the determining factor on how someone’s comeback may be.

Specifically three kids on the baseball team have had that surgery just within the past six months and are already back performing like nothing ever happened.

Fretz also went through ankle surgery at the same time as his shoulder.

While Lantz has already started baseball again, Coach Dinan believes he will be the same player he always has been coming into his senior season of football.

“I don’t foresee him being fearful, him being slower, him having any cautious and apprehension in terms of playing football again.” Dinan said. “There was a question posed to him prior to having surgery, ‘Are you going to continue to play football?’ and his answer was ‘Yes, why would I not.’ I expect those seniors to have the same leadership and characteristics that they have always had.”

Although surgery has affected many things since then, it has only been a place of growth and confidence for both of these athletes. Coming off of a major injury, both players rest in the starting line-up for the Carroll baseball team.

“Even though I was hurt, just to know I can get back from this, it made me work harder, and do the little things better, and do what I can off the field better was a big thing for me“ Fretz said.

Putting your mind to a positive outlook can ease comfort within the situation.

“There has to be a little bit of perseverance in getting your head right, otherwise you’re just going to back out there and risk yourself again,” Lantz said.

Although these athletes have returned to their athletics, it’s still a matter of time until they are feeling 100 percent and confident with themselves.

Finding the right mindset is the hardest challenge in overcoming an injury, and believing in yourself comes first.

“Going to throw there’s that tendency to baby it, and weak it, just because you’re not sure if you trust it yet. I think that’s just a big thing, especially knowing that what the doctors did what they did, correctly.” Fretz said.

Not only does Fretz look at it as a mental game, Lantz seconds him.

“For me mentally, it’s that it’s been hard for me to compete at my highest level, but it’s also hard that I can’t rush back or anything. I can’t force my arm to do things I’m not comfortable with or that may hurt it” Lantz said.

Juniors McKinley Carroll and Veronica Lantz also underwent surgery. Both athletes still remain in rehab and training, but it is only a matter of time before they are back and battling to be the best they have ever been.

Carroll believes that this surgery has really been a setback and crushed her mentally and physically. Although, she has recently started swinging and getting ready for travel softball season.

She still awaits the strength to swing from the bars in gymnastics.

“I 100 percent  feel like the surgery is more a mental game after the surgery because you have to learn to deal with the pain and accept the huge change and the slow recovery process that comes along with it” Carroll said.

Veronica Lantz has went through surgery on both of her shoulders, preventing a comeback right away. Compared to Tranquill, Lantz has been on an uphill spiral looking toward her senior season of swim.

Although surgery put her in a position of trial, she is back to attending practices and getting back in the hang of things. By knowing her limits, she is able to compete at what is comfortable for her at this moment.

“My shoulders get sore, tired, and sometimes painful but overall they feel a lot better than they did. I have learned that it is okay if I need to stop and stretch or do something a little different than the team because I do not want to overdo it and hurt myself again,” Lantz said.

A great deal of confidence and trust reveals character in each and every student-athlete, and even our inspirations continue to fight for their dreams.

“With the 130th pick in the 2019 NFL Draft, the Los Angeles Chargers select Linebacker: Drue Tranquill, University of Notre Dame.”

Drue added the cherry on top of his perfectly made sundae on April 27 to continue his craft, reflecting that hard work always gets you places.

“He tested off the charts at the combine, in terms of quickness, speed, and mobility. They are testing those guys and they don’t miss a beat in terms of their weight, hand-size, lateral quickness, and he knocked it out of the park. With two ACL injuries, he only lost two-hundredths of a second off his 40 yard dash time. I think these are the things that became evident.” Dinan said.

Taking a look back in 2016, Jaylon Smith, another Fort Wayne Native, received his call to take his craft to the professional level in the second round, and 34th overall pick to the Dallas Cowboys.

Three months later, Smith was selected in the second round and pushed himself to be the best athlete he could be while maintaining an outlook called “Clear Eye View.”

“Clear Eye View” was a view that focused on the main goal of someone having clear eyes and always seeing their future in a way that was going to make them successful in their own eyes.

Taking away from all of this, both athletes were able to come to their senses and mentally work in a way that pushed them through their injuries.

Maybe that’s what everyone needs.

Just a simple push from ourselves to be a better version of what we were the day before.

Success is one story, but overcoming adversity and hardships behind the success is another.

Through the underlying strength of confidence and determination, athletes are able to make a comeback they never saw coming.

Reaching out to elders for advice may be all we need to put our minds into the right place. Don’t give up, find the confidence and reach for your goals.

The sky’s the limit, so take your time in finding it.

“Trust yourself , the doctors, and the healing process that follows.” Carroll said.

Build a character that reflects your personality.

“It can show a lot about your character if you stay involved and go to all the practices and games.” Veronica Lantz said.

And provide care for your body that will benefit you in the future.

“Don’t push your limits, and don’t try to go right on the edge of what you can and can’t do because in the long run that can just hurt you more, and make you not advance as quick as you want,” Lincoln Lantz said.  “It’s just a long process that you just have to trust.”