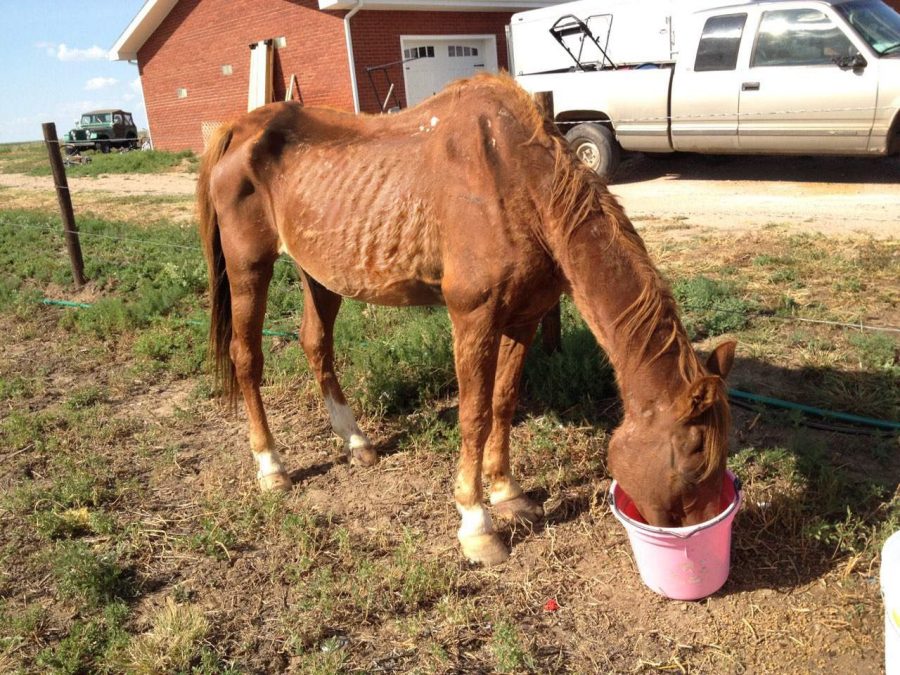 Hugo, a chestnut quarterhorse who suffered from malnourishment, gets a bite to eat from his rescuer, Tosha Anderson. She rescued the horse in 2012 after it was found in a dust pen, which are used to thin down horses.

Every year 1 million animals die because of animal abuse. Animal abuse is the neglect or torture of an animal and while most people love their pets, not all owners are equal.

Animal torture can occur in many ways.  For example, some animals do not get food or water regularly. Some animals have other forms of neglect, including grooming.  Many animals are subject to matted hair from hygienic neglect. When animals are not given proper protection from extreme weather conditions. Those are only a few examples of animal abuse and neglect.

Torture is defined as the intentional infliction of pain or making people do or say things against their will for another’s personal satisfaction. When it is applied to animals the most common word is abuse. Abuse is the 3rd person point of view of torture.

Not giving animals food for long periods of time–days and weeks–can be abuse. This is considered abuse because this will cause physical pain to the animals. This often happens to animals who are used for pharmaceutical and cosmetic testing.

Having knots in hair is not a pleasant experience. Imagine being covered in hair so long and matted that you couldn’t move your arms or legs without being in pain. That can happen to long-haired dogs if they are not taken the groomer or given proper brushings, bathes, and haircuts. This is abuse because the owners would know what is going on with their pets before this gets serious.

Being shelter is important to all living organisms that regulate temperature.  Shelter is defined as proper protection from the weather (like a dog house). Animals don’t need to be kept inside for this to not appear as neglect or abuse.  When an animal is kept in a fence with no protection from the elements when the weather is extreme that is abuse. Also if the animal is permanently not allowed inside. Animals are very sturdy, but when exposed to extreme weather conditions can be fatal even in the wild.

There are things that can be done to stop people miss treatment animals. Indiana has laws that make it a felony to beat and kill animals. You can report any animal abuse that you may see by contacting animal control, law enforcement, or the humane society.

Good Samaritans are able to break into cars and rescue pets in distress. Conditions must be met in order to not get criminally charged. Number 1 believe (with reason) that a pet is in immediate danger of physical harm and that breaking into the car is the only way to get the animal out. Call 911 or contact other authorities (such as police or animal control) before taking action. Use the minimum amount of force needed to remove the animal from the car, and stay with the animal until an officer or emergency responder arrives.” Citizens are not encouraged in any way yo save these pets. The good samaritan who followed these steps could need to pay for half of the costs for repair or any damages resulting in the rescue.