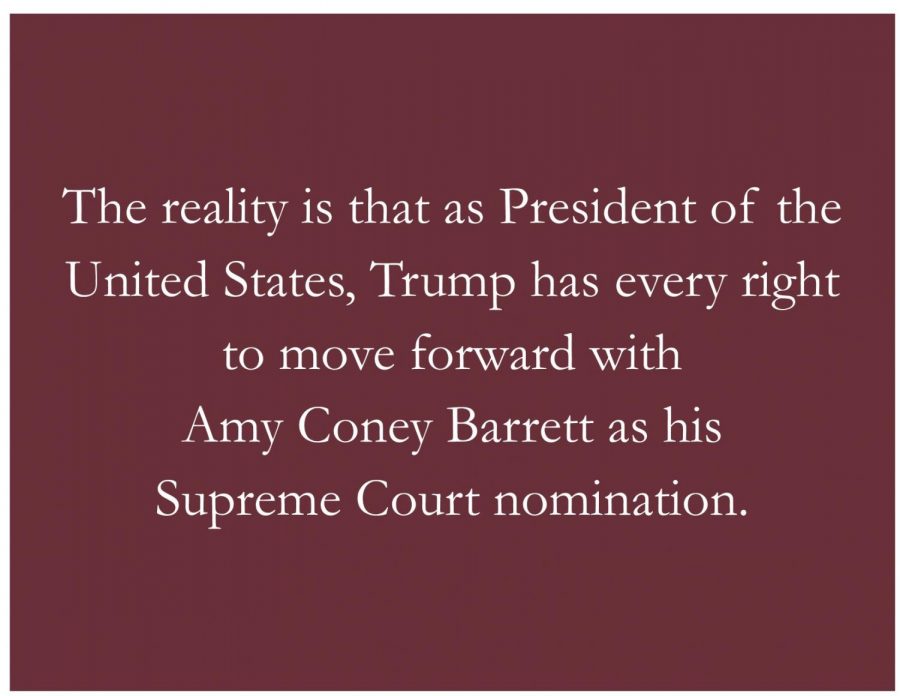 Under Article 2, Section 2, Clause 2 of the Constitution, “he shall nominate, and by and with the Advice and Consent of the Senate, shall appoint Ambassadors, other public Ministers and Consuls, Judges of the Supreme Court, and all other Officers of the United States.”

It should come as no surprise to anyone—the left or the right—to see Trump fulfilling his duty as president in appointing a new Supreme Court justice following the death of Justice Ruth Bader Ginsburg on September 18.

Ruth Bader Ginsburg was a force to reckon with in the Supreme Court; a pioneer of woman’s rights and a way-maker for women in law. From eliminating gender discrimination in the workplace to extending military positions to women, Ginsburg has been the legal face of feminism—a face that will not easily be forgotten or adequately replaced.

But at the end of the day, the Supreme Court cannot stand at eight justices. Nine justices must assume the power of the highest court in the land to break ties and settle important issues on the upcoming docket.

While the left may appeal to the imminent emotions surrounding the justice’s death, the reality is that as President of the United States, Trump has every right to move forward with Amy Coney Barrett as his Supreme Court nomination.

Biden put it perfectly himself: “Voters should pick a President, and that President should select a successor to Justice Ginsburg.”

The people picked their President in 2016. That President has selected his successor.

“That’s their job…there’s nothing in the Constitution that says the president stops being president in his last year,” Justice Ginsburg said herself in 2016 following Obama’s appointment of Merrick Garland to fill Justice Scalia’s vacancy nine months before the 2016 presidential election.

The difference, it seems, is a Republican president with Republican majority in the Senate—an almost guarantee for Barrett into the Supreme Court.

If Obama had Democratic majority in the Senate in 2016, he would have taken the same actions as Trump is now in 2020. Both parties play into what gives them more power, but gawk at the other side making the same decisions they would make if roles were reversed.

It’s a game called politics; a dangerous game that should not be touched when it come to the Supreme Court, meant to be colorblind to party affiliation, seeing the law as black and white.

For decades, both the democrats and republicans have continued to jeopardize the objective, lawful process of judicial review by making the judicial branch of government party politics.

“Amy Coney Barrett is a conservative.”

“Ginsburg was a liberal.”

“An additional conservative will flip the majority 6-3.”

The law is the law the law.

Amy Coney Barrett is outspokenly conservative, but she is also an outspoken proponent of stare decisis, Latin for “Let the decision stand.” She believes decisions of the Supreme Court to be “binding precedents” and intends to faithfully follow them if confirmed.

We can’t predict the future. We don’t know how Barrett might vote on upcoming decisions such as the Affordable Care Act and Roe v. Wade. But we do know that she stands for the law before party politics. She believes in letting the decisions stand.

The law is the law the law.