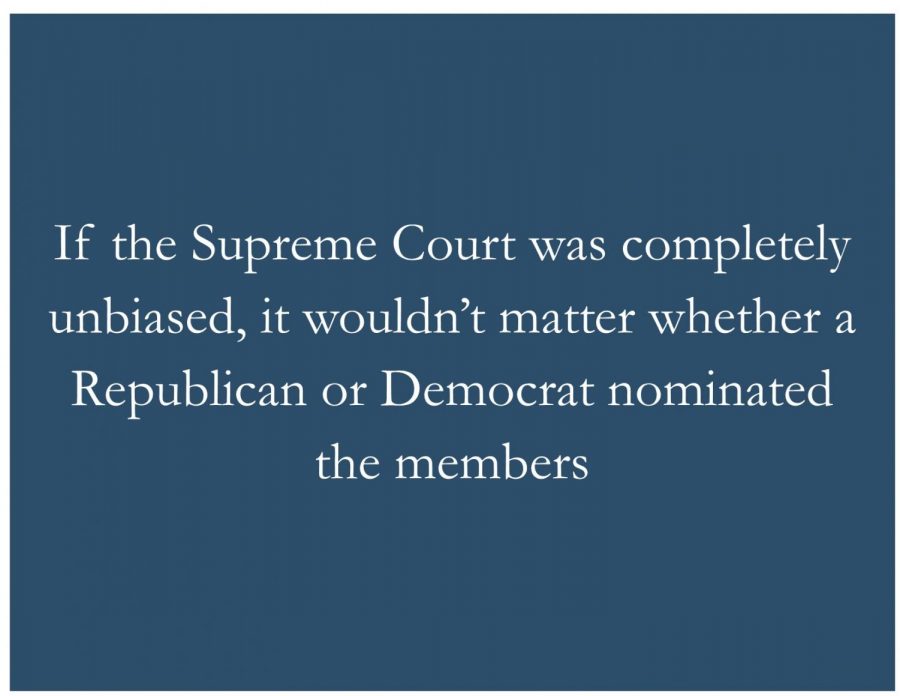 Supreme Court members are not elected, they are appointed by the president and approved by the Senate to serve for life.

They affect people’s lives just as much if not more than the elected positions, yet the people are not given a say in who is selected.

This design was made so that the highest court would not be influenced by politics, and that they would do their best to interpret the law, not further their own political agendas.

The problem is that the law is not as black and white as it might seem. A Justice’s personal stance on a case generally effects their judgement when it is a majorly divided argument between the two parties.

If the law was so black and white, there would not be such a divide on the Court which is usually split down a party line on issues like abortion, immigration, religion and schools, and Native American rights. These are Civil Rights cases.

Civil Rights cases should not be decided by nine people on a court. Adding more justices won’t change the essential nature of an unfair system.

President Trump himself tweeted, “We need more Republicans in 2018 and must ALWAYS hold the Supreme Court!”

Therefore, Democrats should be worried by the death of Ruth Bader Ginsburg.

John Roberts, Chief Justice, is right leaning but only slightly and has been siding with the liberal Justices for the most part this year.

Amy Coney Barrett is the President’s choice to replace Ginsburg, and her place on the Court would give the republicans majority 6-3, so Roberts would no longer be enough for the liberal opinion to win.

With huge Civil Rights cases set to appear in the Court soon such as revisiting Roe vs. Wade and The Affordable Care Act (ACA), as well as recent talk from Justices Thomas and Alito how they would like to revisit the case that made gay marriage legal in all states, a lot is at stake for Americans.

On one hand, the Constitution grants Trump the right to appoint a judge even with a month left until the election, but Obama was not given the same right four years ago.

Senate Majority Leader, Mitch McConnell, blocked Obama’s Supreme Court nomination eight months before the election because he thought that the American people should get a say through the election, but he has now said that the situation is different since the President and the Senate are of the same political party majority.

McConnell has admitted that his flip in opinion had completely to do with the political convenience of it for the benefit of the Republicans.

If the Supreme Court was completely unbiased, it wouldn’t matter whether a Republican or Democrat nominated the members, but it does matter because the Court has been declared by the President as something a party can “hold.”

It matters how each member interprets the law, and they can back up their stance either way just how Mitch McConnell did with the Senate.

It matters because the Supreme Court had to decide if no discrimination in the workplace on the basis of sex applied to sexual orientation and gender identity.

It was not what the creators of The Employment Non-Discrimination Act intended, but their inclusion could be interpreted from the document, and it was.

The Supreme Court might not write laws, but they interpret them in a way that set precedents that affect the lives of millions. Nine people could take away abortion rights, the Affordable Care Act, and marriage equality.

Those are what are at stake right now.

Therefore, the appointment of Barrett is not just about her as an individual, it’s about the millions of lives she will affect.

It might be the President’s right and the Senate’s choice, but with less than a month until a monumental election, the people now than ever deserve a say.