Commentary: How bad will this be? 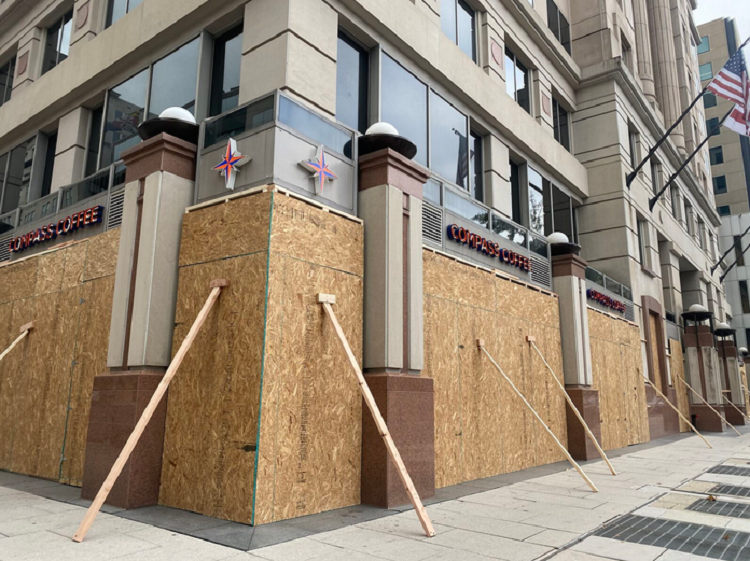 Businesses in Washington D.C. boarding up to prepare for the election riots

I was up late watching the news, hearing the same few sentences repeated over and over, but I couldn’t look away as if I would miss a breakthrough if I did.

It was finally the night that everyone was waiting for; The Democrats hoping to correct the mistake made by America four years ago.

In the midst of the pandemic, a mistake that contributed to the loss of more than 200,000 lives.

Uncertainty was widespread, not only for the results of the election, but for the chaos that could ensue afterwards.

Businesses across the country boarded up their windows in anticipation for election riots. There was talk about the possibility of a civil war.

How could I sleep when so much is at stake?

I couldn’t stop thinking of how it’s a closer race than it should be, of all the people at risk: those who could loose their healthcare, victims and those were targets of police brutality, people who were dying or lost their family and friends to covid-19, those who were fearful of the security of their rights, and so many more.

I was scared to fall asleep without knowing the results because I did that 4 years ago, and I woke up to a nightmare. I’d rather not repeat it.

What would the country talk about after the election?

It seemed like half of all conversations had been election based, the other half being related to COVID-19. Perhaps talk would shift to about the unfairness of the system or gratitude for it depending on what side they’re on.

I’d heard so many say something along the lines of, “I’m just ready for it [the election] to be over.”

I’d rather stay in a comfortable couple months before the election because I was afraid to be faced with news I did not want to hear.

Four more years of Trump was what I couldn’t bear to hear.

Seeing the votes pop up on the screen, red and blue coloring the map, made it so much more real. It wasn’t just an event coming up in a while, it was here.

My mom had to be pulled away from the TV screen to get some sleep as she remarked how she felt like she could throw up.

The nerves were real, much more than any other recent election because much more was at stake.

If Trump got reelected, it would prove that no matter what he said or did it would not change his supporters’ opinion of him. They cannot be swayed.

Despite his criticism of the press, President Trump has over and over proved that all press is good press.

As I continued to watch the results roll in, I could only hope President Trump was voted out.

Keeping him would be a strong hit at our democracy and what we stood for as a country. The United States did not have the safe and stable democracy we claimed to have, otherwise the country would not be preparing for the fallout of this election.